Blessed are the hungry, for they shall be filled.

Ninety-Nine Random Facts About Me

You may email me at:
glutenfreeinthecountry@yahoo.com

Followers of this blog:

Just a Few of the Many Wonderful, Gluten Free Blogs Out There:

Two-year Olds Can Put on their Own Boots 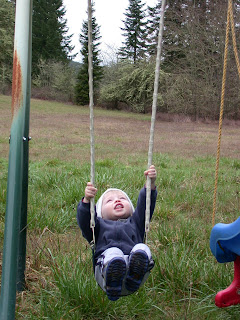 It's a beautiful day here in the Willamette Valley. For all of you out-of-state folks, I'm talkin' about Oregon. It rained last night, the grass is almost neon green and the sun is shinning in that almost summer kind of way.
I'm trying to get old photos scanned (for my husband's family no less!). Gee...I must be some kind of saint. Anyway Joshua, a.k.a. "Little Man" is no dummy. He's already fetched his boots and put them on. Surprisingly, they're on the right foot most of the time, although I never know whether he's left his socks on or not. We have a beautiful piece of property to explore, but alas! there's no fenced-in yard. That means I'll be donning my boots as soon as I can and be outside with him.
I never know what direction I'll head in. Lately he's into picking up spiders running all over the ground or opening the door to the chicken coop. Then there's goat poop that he seems so interested in or mud puddles begging to be splashed in. It's not that I don't let my boys get muddy - I just like them to be outside more than a few minutes before they're covered in it.
I'm not sure how pioneer women managed it all and without a washing machine, no less! Maybe they had more time since there were no cell phones, email, or television. Hmmm...
Blessings!
Posted by Debbie at 10:16 AM 1 comment:

Chickens and a Job


Hello,
I hope this post finds you well and not in shock that something is actually new on here:) What's new?
Chickens!
We got 15 baby chicks several weeks ago - 12 Rhode Island Reds and 3 Black Australorps. Needless to say they were a big hit with the boys. Nathan did a good job of feeding them and being calm around them so that they would get used to him. Joshua was allowed little time with them seeing as how he's two and they would be squished to death if he got ahold of them. 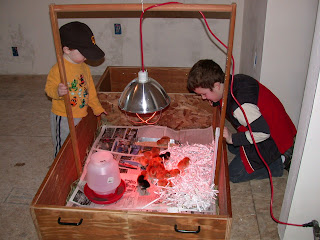 They're now in a coop that my husband built. It was far more involved than what he thought it would be. Poor man. It's actually referred to as a chicken tractor. Right now it is in front of the house in case we need to turn the heat lamp on for them. Eventually it will be hauled to pasture by the tractor and moved around once a week or so. It's semi-free-range I guess. They get to feed off the land and yet stay alive in their protective space. 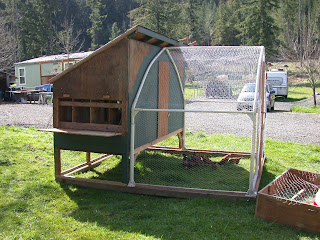 A Job!
I'm pleased to post that I've received an official position teaching 5th grade with a local charter school. Woohoo! I've been subbing for this one and a sister charter school this past year and absolutely love it. It is wonderful to know ahead of time that I have a fulltime job this coming fall. Now I have to really get my act together and get some things nailed down before heading back to work with two small boys to take care of also. I'd like to find more of a pattern in the cooking/putting food up department. And...I'd love to catch up on some scrapbooking and things like that. I'm thankful that my husband is such a great help. I couldn't even imagine doing this without him.
Blessings!
Posted by Debbie at 4:58 PM 3 comments:

I buy a lot of eggs. I'm sure you do also if you bake gluten free. I remember the first time I began cooking GF and how strange the recipes seemed. Not only were there at least eight ingredients, but rarely did I only need two eggs. Now, three to four eggs per bread and other baked goods is the norm. Even when a recipe calls for two eggs I frequently add a couple more whites whipped to give it lift and some more protein. I don't really know what it's like to buy a dozen eggs at a time. Those days are long gone.

My husband and I are researching chickens. We would like to have some next year and since we have some pasture land to let them "range", why not? We are getting our "chicken questions" answered such as: How many eggs will a chicken produce each day? Do we need a rooster? And - What kind of chickens are better than others?

My husband is going to build a "Chicken Tractor". Actually it is a wired pen and hen house in one that you can move from spot to spot with a tractor (or pull it if you're strong enough). This lets the chickens free range which produces better eggs and the chickens are happier and more stress free. It is also fully enclosed to keep out predators.

We have a couple of goats (not to change the subject) and they are allowed a large area to roam and graze. My friend has a couple of goats that she has to stake out. The difference in our goats is quite amazing. Ours are probably twice the size and very healthy. It only makes sense that animals do better when not penned in. No, I'm not a PETA zealot, just making an observation.

Anyway, will post some pics one day if we get our chickens. It will be nice to know our eggs are really fresh.

Check With Your Local Butcher First

My father-in-law offered to bring the ham this year. Last year, he bought a smoked turkey from a specialty store. It listed "smoked flavoring". I called the company, and one of the workers said he couldn't verify it was gluten free. I looked online, and any smoked powder I could find also had barley in it. I hate barley- it hides. Needless to say, I had to go buy a small ham so my little guy could feel included last year.

This year, I went online to search for some gluten-free hams. I suddenly thought about checking with a local butcher that we bought a side of beef from last year. He actually smokes the ham with apple wood and no extra powder is included. He went and checked a couple of other ingredients and was so thorough because as he said, "Hey, those things are important". He then explained to me that his daughter has a peanut allergy.

Well, it was $1.99 a pound for fresh, local ham. Can't beat that - and I got to support a local business man. Not only am I happy with the ham purchase, I found out that his ground beef is lower than what I've been paying at Costco and it is certainly far superior to that as well. So...check with your local butcher first!
Happy Thanksgiving!
Debbie
Posted by Debbie at 6:19 PM No comments: 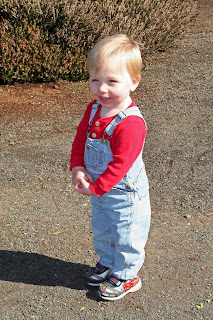 I'm still in the land of the living although it seems like time has been suspended as far as my posts are concerned. As you can see from the above picture, I have an angel keeping me very busy nowadays.
All is well here and I continue to try new gluten-free recipes. I wouldn't say I've done any innovations in the kitchen and therefore haven't posted. I will tell you I think Carol Feinster's French Bread recipe is "to die for", or "to live for" as some put it. It has a huge amount of yeast in it, and I stayed away from that for awhile. I think yeast spins my son up (you know, the yeast/gut theory) and so I've avoided it. However, I couldn't get out of my head the fact that yeast dies at a certain temperature. I don't think he has an intolerance to the actual yeast protein or makeup but rather the fact that it can grow in numbers in the gut as it feeds on sugars. I tell you, it's like he's been drunk at times because of being so silly, loud and impulsive. I do think that items like breadsticks that don't cook as long are a problem if he eats too much of it, but the french bread seems to be fine (that's the only yeast item I've been making) and we're all in heaven.
What else is new? I've been subbing this year, as I wasn't able to get a teaching position. The few jobs that have been open attracted 100-200 applicants each. It was hard to even get an interview! I did stumble across subbing for a charter school in the area. I've been so impressed with it - the small class size, the respectful students and friendly staff. Now I know I would like a job there as opposed to some of the other schools I applied at. Hopefully a position will open up next year. They seem to be real pleased with my work and that feels good. For now, that is bringing in some extra change and working out real well.
Other than that, I can't wait for Thanksgiving, because we're having quite a few family members here for that. It will be nice to know that I don't have to stress for my son what is on the menu!!
I know that people reading this blog can appreciate that!
Take care and hope to post a few recipes with pictures soon!
God Bless You,
Debbie
Posted by Debbie at 11:04 AM 3 comments: